Authority is nothing else but negotiation: you negotiate with your project team their willingness to be lead by you.

Therefore, a good project management skill is to be able to gain authority by influencing your Project Team’s choice on who to grant authority to.

And with the right tools, however, authority is something you build, gain and maintain.

In this post, I will show you 4 easily actionable techniques you can use to build your Project Manager authority right now.

Granted, that quote is from a comic book, but it hits the nail on the head.

Exactly, neither do your teammates.

Just as much as employers would rather hire people they could be friends with, people are more willing to work with project managers they could go have a beer with after work.

Now, don’t get me wrong.

Being likeable will possibly have no direct effect in your project’s outcome.

it will dramatically improve your ability, as a leader, to influence the flow of the project and to gain acceptance of your decisions from your project team’s side.

Of course, being likeable is not easy for everyone.

Some people have it natural, some others can learn it.

NOBODY, though is unable to be likeable.

So if you’re one of the project managers that could use a bump, try this, starting tomorrow:

Outcome 1: you truly and deeply connect with your teammate on a topic that he or she cares about;

Outcome 2: you fail, but are perceived as making an effort to connect to your teammate.

Does that really seem so daunting?

Even the worst case scenario will have brought you something!

A project manager and his team are there for the same reason with respect to each other: they need to make each other’s life easier, while trying to attain a goal.

Who do you like best in your project team?

The team member that slacks off or the one that works the hardest and gets you results?

Then, don’t be surprised if the opposite is also true: project employees tend to like more the project manager who is able to make their life easier.

In practice, what does should you do?

For example, you could prepare your project team’s job for how you want it done, instead of asking for something and telling them to correct it when it’s not done as you want it.

Or you could act as a bridge to higher levels: in dealing with whoever is above you, have your project team’s back and let them know you do.

They will do the same for you.

By being granted unrequested acts of kindness (e.g. laying out the work for them), they will feel happy to do the same for you. This is a basic psyichological effect called reciprocity. 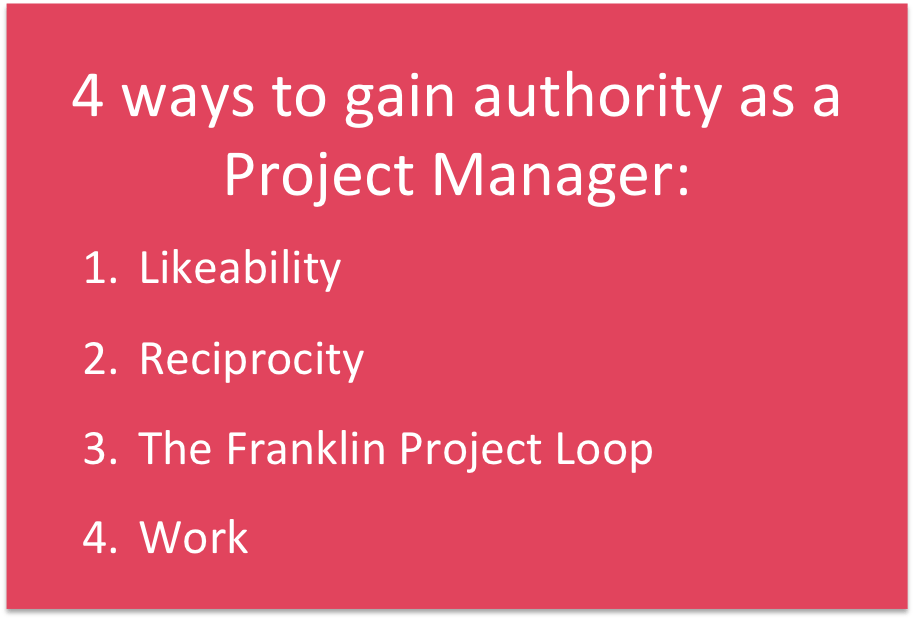 Famously linked to Benjamin Franklin, the Franklin effect is nothing else but: “Have someone do you a favour, and in the future, they will be happy to do more favours to you than they would be if you had done a favour to them“.

In Project Management, this is fully applicable.

Not only will the make your project manager’s life easier, it will also affect the quality of the project’s outcome.

You have already established how serving your project team will, in turn, make them more interested and willing to serve you back – i.e. do a good job.

This is what I call the Franklin Project Loop.

If you can manage to request a task to your project team by phrasing it as a favour, and have them do it for you, then you can be sure they will be more willing to follow up with more favours next time.

As you can see, if you leverage the Fanklin Project Loop enough and embed it in your project management skills, you will have teammates that will be completely devoted to your cause (i.e. the project results) and that are willing to accept your leadership better.

As you can see, this is an invaluable project management skill to have.

But it is also one of the most difficult ones to attain.

There are two caveats to this project management skill:

Do not abuse the Franklin Project Loop

Your team is not stupid, and neither are you, my dear reader.

By now you have probably commented in your head “hold on, this is borderline manipulation, this is not project management skills“

And you are right: if you abuse this technique, you will be a manipulator, and your team will see through your game and call you out on it, refusing to do better work and ultimately destroying all you have tried to build.

What is worse, they will probably despise you – so be careful.

This technique is extremely powerful, but also very delicate.

Make sure your project team is ready

The Franklin Project Loop is one of the advanced project management skills.

To initiate it, you need to be able to ask your team a favour, and they need to be willing to do it.

If they are not, work on reciprocity a bit more before hoping to get the Franklin Project Loop started.

As a matter of fact, you should never fully stop working on reciprocity, and use it in parallel to the Franklin Project Loop.

Work, and show it

There is no way of getting around it.

You can’t lead by example if you don’t know what you are doing.

So, as far as project management skills go, showing that you are good at your job will take you a long way.

There are no shortcuts to becoming technically skilled in anything, just hard, hard work.

What can also take you a long way in being granted authority by your team is not only working on your project, but showing your project team that you are working as hard as them, if not more.

Remember when we mentioned likeability?

Now ask yourself: which team would you like to be on: project A or project B?

Regardless of your technical skills, being human does not make you any less authoritative.

And as we said in the beginning, Authority in Project Management is nothing else but Negotiation.

So, according to this, whose team do you think will have their project manager’s back in the end? A or B?

Tell me: what technique do you want to use first?

Let me know what you think by leaving a comment below right now.